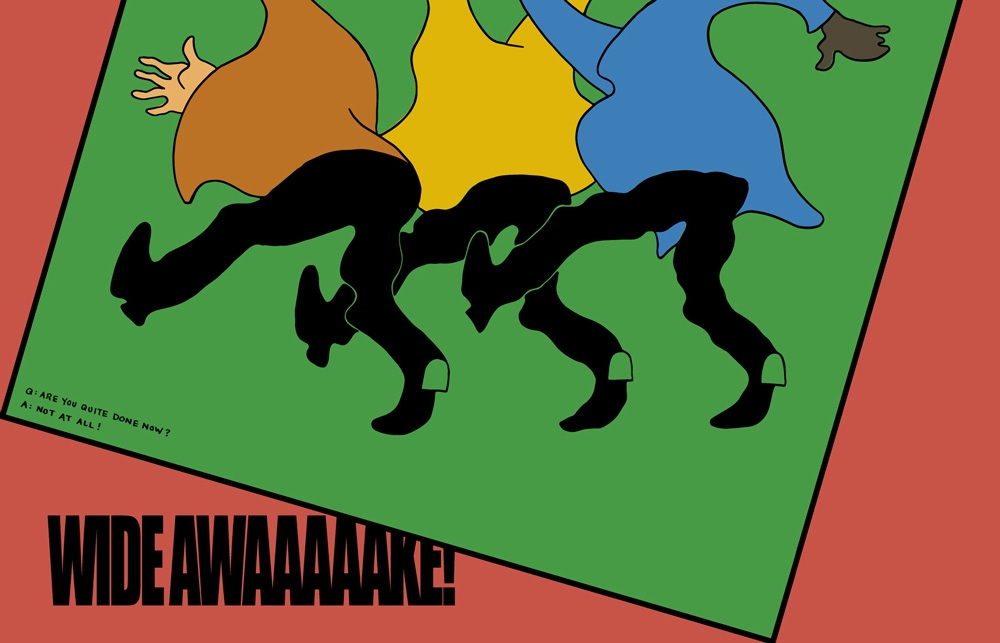 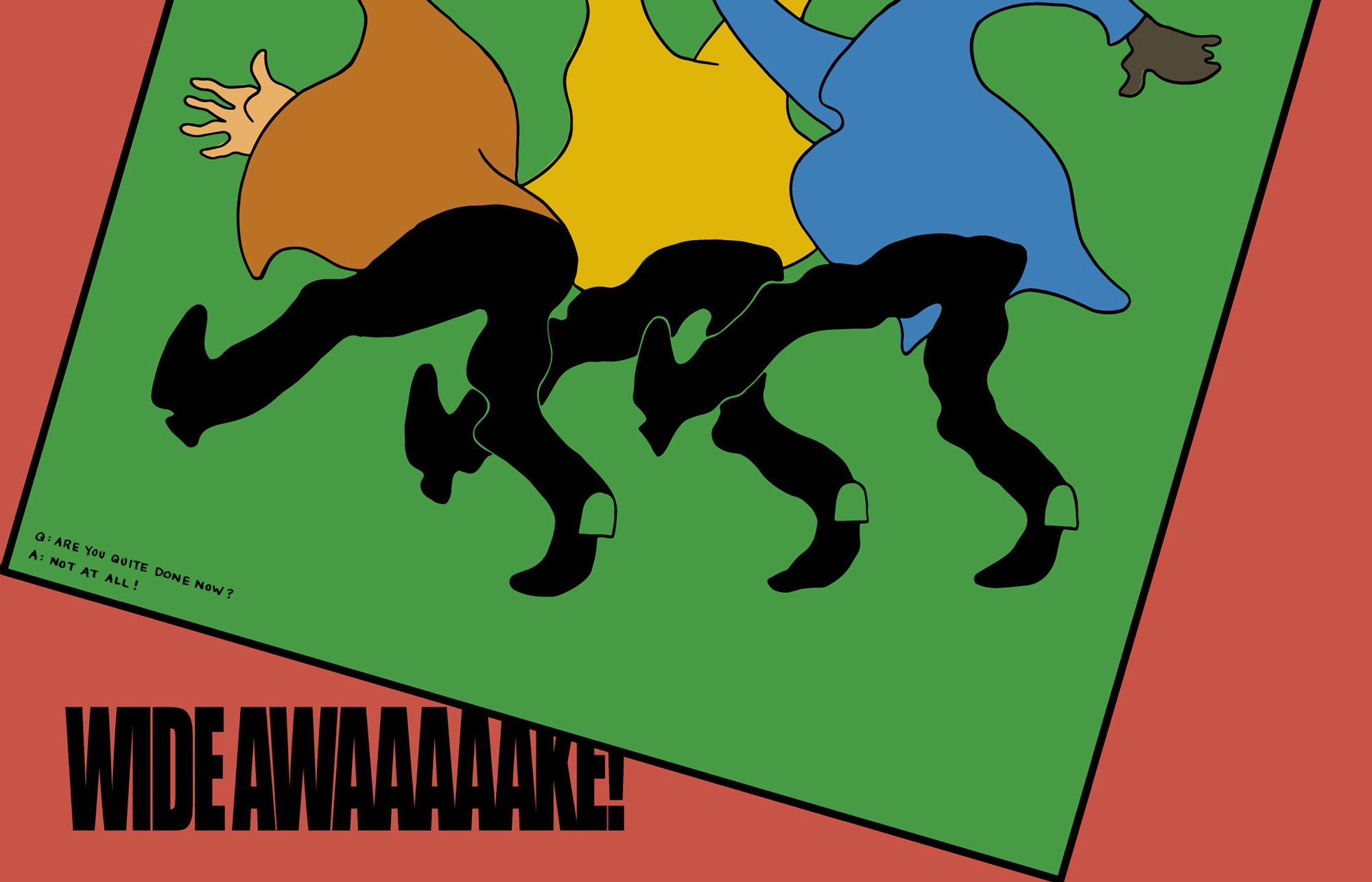 In the history of music, visual identity has never been more important. If you think that’s an overstatement and maintain that Andy Warhol designed The Velvet Underground and Nico, the 1960s were better, and nothing could be more iconic, important, and life-alerting, I would say, yes, album cover art has indeed had extremely essential moments in the past. However, whether Instagram, YouTube, Twitter, or physical vinyl packaging, bands can do so much more with visual art in 2018. When some forewarned that the digital world would kill music, they did not consider that music would evolve in its freedom to explore its entire identity like never before.

A. Savage is lead singer and guitarist for the NYC indie band, Parquet Courts, as well as an accomplished fine artist who is behind many of the band’s album covers and visuals since its inception in 2010. When word got out that their newest album, Wide Awake!, would be released in spring 2018 with production from Danger Mouse, many wondered if their sound would get a new-studio sheen not previously heard in past recordings. On the contrary, the band returned with even more raw energy, accompanied by a brilliant animated video featuring Savage’s bright and bold characters for the track, “Almost Had to Start a Fight/In And Out of Patience." With the Wide Awake! deluxe vinyl release sporting a 16-page booklet of Savage’s art, we sat down with the musician and artist to talk about the influences of John Wesley, fitting fine art into a schedule, and maybe getting around to that 10-foot painting.

Evan Pricco: Drawing or playing guitar? What comes first in the morning?
A. Savage: Well, first comes the radio, then coffee. I make it to my studio, on a good day, before noon. So I'd have to say drawing. Typically, guitar is a second-half-of-the-day activity.

Okay, so what came first in your life? Art or guitar?
I started drawing before I learned an instrument.

You keep a proper art studio in Brooklyn, so I assume that is where you spend most of your time when not making albums or touring. If we were to walk into your studio right now, what would you be working on?
About 20 paintings for a large installation. I can't give much more in the way of details. But you'd probably walk in and say, "Wow, that's so many paintings you're working on". And I'd say, "Sorry, I can't really talk about this."

I love the band's visual identity, and even before I knew you were creating most of it, if not all, I immediately thought it was super smart in terms of how color presentation and imagery fit with the sound. It made sense to me, in the end, that someone so intimately involved in the sound would be able to get it right with the visuals. This really isn't a question but an observation: was making art for Parquet Courts just a consequence of you being good at art and it all fitting together? Was it a necessity?
You are very intuitive because we are super smart. I do like for an album color to be a hint, and then a component, of the sound inside. I suppose me making the Parquet Courts artwork is a necessity in that I'm a control freak and just don't think anybody else could do it better. I like for the art and music to be different from one another, but still feel that is distinct to the group. Someone should want to hear it by looking at it.

I read in a past interview that you looked at artists like John Wesley and Jacob Lawrence (two of my favorites, full disclosure) as influences or interests; prime examples of artists mastering color. I see in the new album art for Wide Awake! a little of that wonderful use of color like Wesley’s. Do you feel that you are growing more confident with your personal art?
Those are two wonderful but very different painters. I assume by personal art you mean art that doesn’t have to do with music. I'd say I'm growing more confident, yes. It's a language that is really different from writing lyrics. You have to communicate an emotion or sensation without, by and large, the aid of words, and that's a challenge. But I do like the process of navigating those emotions and distilling them into imagery.

Do you collect at all?
When I was a kid, I collected Pez dispensers. I have 3,000 LP's in my apartment, but I don't think I collected them.

Yeah, I never liked the idea of a “record collection.” I have records. I don’t collect them. We were thinking here on staff about other musicians who are known for personal art... like Tom Waits or David Byrne, for example. I don't want to turn this into a "who are your art heroes" question, but do you have influences that extend between art and music?
There's a band from NYC called B Boys, who are good friends. Their bass player, Brendan Avalos, does all of their art. All of the Lumpy and the Dumpers covers are great, I imagine that Mr. Lumpy himself must be behind that. Sam Ryser from Crazy Spirit and Dawn of Humans' work is great and fits perfectly with the sound. Those two are both highly imitated. Jess Aurelius from Destruction Unit does some great work.

On the other hand, my good friend Bradley Kerl has done most of the artwork for the band Ultimate Painting. He's not in the band but I do like it when bands work with an artist that they believe in and have a good eye for visuals that compliment their music. Total Control would be an example of a band that works with amazing artists.

The first video from Wide Awake! was your work animated, and when I saw it, I thought, "Andrew is making some of my favorite work in all of art." I just loved the characters and the color choices, just the simple boldness of it all. Will the book of art and illustration in the deluxe vinyl edition of the album feature that sort of vibe from the "Almost Had to Start A Fight / In and Out Of Patience" video?
Yeah, all of that stuff came from the album art. I didn't have any hand in animating it, I'm not an animator, but it was cool to see those bits come to life.

Are you planning any exhibitions anytime soon? Or is that something you have to wait for until the promotion of the album is over?
I had a solo show in NYC and Chicago last year, and a group show in San Francisco. A lot of these paintings I'm working on now are going to end up in a long-term installation of sorts. But as far as exhibitions go, I'd like to build up something in the next year for that. It's definitely on my mind.

If time was of no consequence, what is the next thing you want to explore in the studio?
Maybe a 10-foot canvas? Space and transportation would have to be of absolutely no consequence.