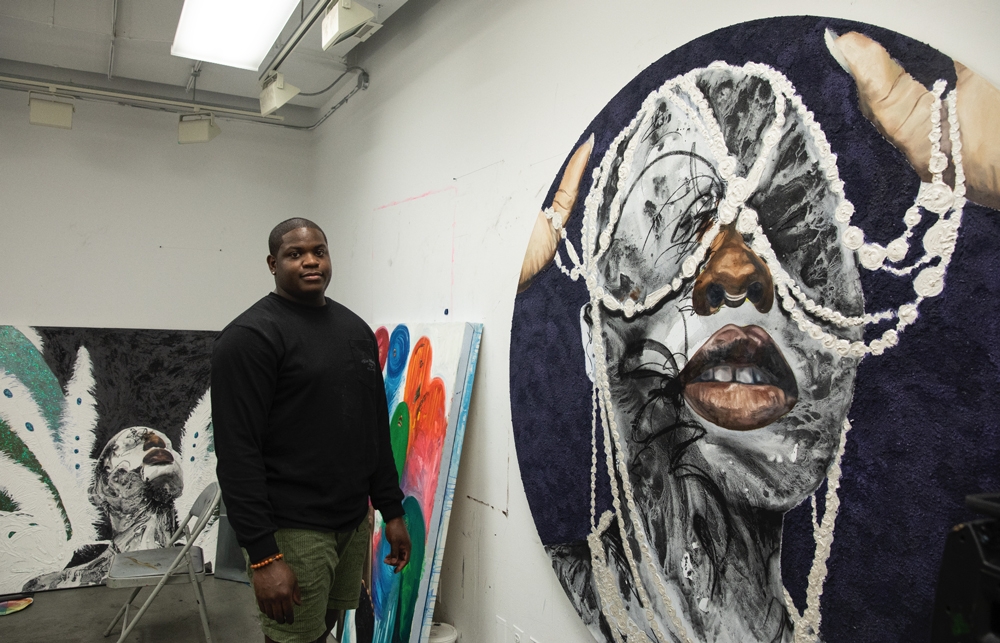 The second one is this piece called Meeting of Two Oceans that I did right in Venice. It was composed of one section of ocean water and then another section of ocean water with different pigments that met in the middle but did not mix. The idea was if I was to go to the beach and try to meet an ancestor at the edge of the ocean, would I bring flowers? And then, I painted or drew flowers into the piece. I thought, this is the piece. This is the one. This is fantastic.
DG: That turn of phrase, “If I met my ancestors at the edge of the ocean, would I bring flowers”...? Is that a reference too, or is it just pure you?
No, it's just pure me. A lot of my time before going back to school I was looking at slam poetry. I have a lot of friends who are slam poets, and I have a bone for poetry. A lot of my titles are Langston Hughes poem references. And so, there's a lot from me.
I was the kid who sat next to the water, and thoughts just came. Things like that just made sense in the way where it's a mix of the real and fantastic, which is kind of the same way that I paint; there are parts that are realistic and then parts of that are just abstract ideas that potentially could happen.

It's not always at the beginning of the thought. Sometimes I'll be in the middle of a painting, and then have this thought. If you ever see a picture of two oceans meeting, they mix at the bottom, but there's a clear sign they hit each other. So, to me, if I was in that position, and I was an ocean… my body is a body of water meeting an ocean of a body of water, and memory is in water. So to think of an ancestor in that water, to think of us meeting, wow, what would that be like?

Khari Turner’s solo show with Ross-Sutton Gallery in NYC will be on view through July 10–August 7, 2021